A variety of inscriptions were present in the synagogue and they provide information about the worshippers and the Jews in Dura. The inscriptions are written in three different languages: Aramaic, Greek and Middle Persian, in keeping with the multilingual population living in and around Dura Europos. The inscriptions were painted on the ceiling tiles and on the wall paintings; graffiti was scrawled in several different places in the synagogue. After the ceiling was destroyed during the realization of the embankment, the fallen tiles were spread inside the synagogue’s remnants “on top of the deposit of earth forming the second phase in the development of the embankment.”1 When the tiles and the paintings were exposed to the light the inscriptions and the drawings faded and the written texts were irrevocably damaged. “Dipinti” (painted inscriptions) on the walls functioning as captions to paintings and on the tiles are better preserved. The originals are in the National Museum of Damascus and in the Yale University Art Gallery. Many photos of the tiles and of the paintings made in the years soon after the discovery make it possible to read those inscriptions that are almost entirely faded today. The situation is different for the original graffiti, especially the graffiti scratched on  fragments of the wall’s plaster coating or on fragments of the lintel and doorjambs, which are almost completely lost; with few exceptions, no photos of these graffiti are available. The archeologist Du Mesnil du Buisson, one of the first to study the original Greek and Aramaic inscriptions as well the paintings, deciphered and copied the graffiti in Aramaic and in Greek, and left to modernity his precious but sometimes very controversial drawings. Among the few original graffiti left, there is, for example, a graffito on the dado in the synagogue paintings, which is still visible today (at least in photos) with the Greek name “Boethus,” as well as graffiti with the name “Orbaz” on tiles.2 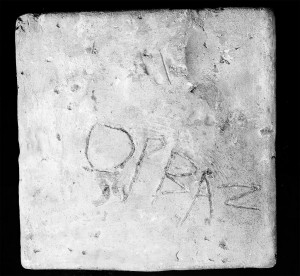 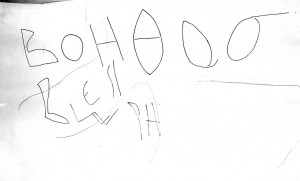 Tituli visible in photos of the paintings have been discussed in the Iconography Section, but an autopsy would be necessary to evaluate the situation at the present time in the Museum of Damascus. At any rate, due to their explicatory function, tituli are usually succinct. Methodologically, inscriptions interpreted based on reading copies and not originals, or at least on photos of originals, cannot be considered authoritative. Unfortunately, most of the intriguing graffiti do not exist today as originals. A brief survey of the most relevant inscriptions follows below: The building inscriptions, some graffiti, and an outline about the Middle Persian inscriptions.
Abbreviations
The inscriptions in this text are from the excavation report, Final Report VIII, Part I published in 1956 by Carl H. Kraeling (see Bibliography). Three scholars contributed to the inscription’s section: C. Torrey for the Aramaics inscriptions, C. B. Welles for the Greeks one and B. Geiger for the Middle Persian inscriptions. Their names are quoted in the following manner: Inscription no.1 Torrey in Kraeling, etc. The other work is: Inscriptiones Judaicae Orientis (=IJO) published in 2004, whose authors D. Noy and H. Bloedhorn are quoted as: Noy-Bloedhorn. Inscriptions from IJO are quoted as: Syr + number.